Studying in France: A Budget Friendly for Studying Abroad 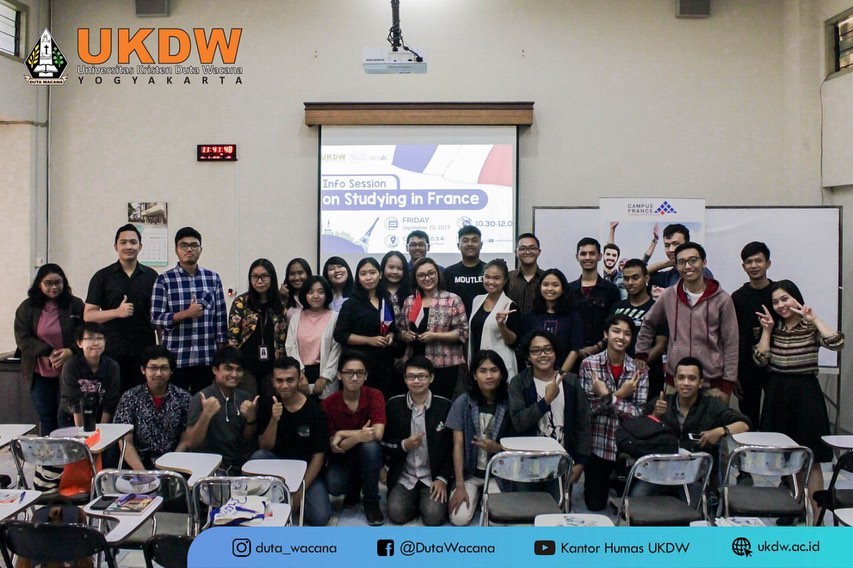 From the iconic Eiffel Tower and the rows of museums and art galleries to the stunningly beautiful countryside, France has enticed millions of people each year to come, making this country one of the world's most popular tourist destinations. Not only tourists, the country which is well-known for its cuisine and wine, also attracts students from around the world to study here. Why and how to study in France, were answered in the info session organized by UKDW Office of International Affairs in collaboration with Campus France of IFI-LIP Yogyakarta, on Friday, September 20, 2019.

Taking place at Classroom G.3.4, this event was attended by UKDW students from different majors including Management, Accounting, Informatics, Information System, Biology, Architecture, Product Design,  English Language Education, and Medicine. Talking in this session was the representative of Campus France Yogyakarta, Andraine Arkenzi Febreinza or known as Reinza. Campus France is a public institution under two French ministries  - the Ministry of Europe and Foreign Affairs and the Ministry of Higher Education, Research, and Innovation. Campus France Indonesia is in charge of promoting French higher education in Indonesia.

“French is the second most studied language after English. It is the official language of 29 countries, spoken by more than 270 millions people. Learning this language will be a valuable asset for your career,” Reinza started. Digging deeper into the topic of studying in France, Reinza talk about the education system in France, the quality of education, internship and career opportunities at France company in Indonesia, and the quality of life in the heart of Europe. “As you use schengen visa to stay in France, you can freely travel to Germany, Italy, Spain, and other European Country in the Schengen Area,” Reinza added. In addition, it is also possible for the student visa holder to have a part-time job with minimum wages €9,88/hour.

Good news for those who want to study in France, is that the French government subsidizes the tuition fees in public higher education institutions. With ⅔ subsidy of tuition fees for international students per year, studying in France becomes more affordable. French government also provides a special rate for students to access transportation and entertainment such as cinema, museums, and theatre as well as electronic purchase by showing student ID.

After sharing all the important information about studying in France, the activity was continued with a question and answer session. Participants were eager to ask and discuss about this topic, including the choice of study program, the scholarship requirements, French certification, and many more.

While money can be an issue in studying abroad, with the support from French government to make tuition rates more budget-friendly and the availability of scholarships, France can be a good choice for pursuing higher education. As long as one keeps trying, there surely will be a way for a brighter future. [drr]