Student Visit and Discussion: Rural and Urban Development in and around Yogyakarta 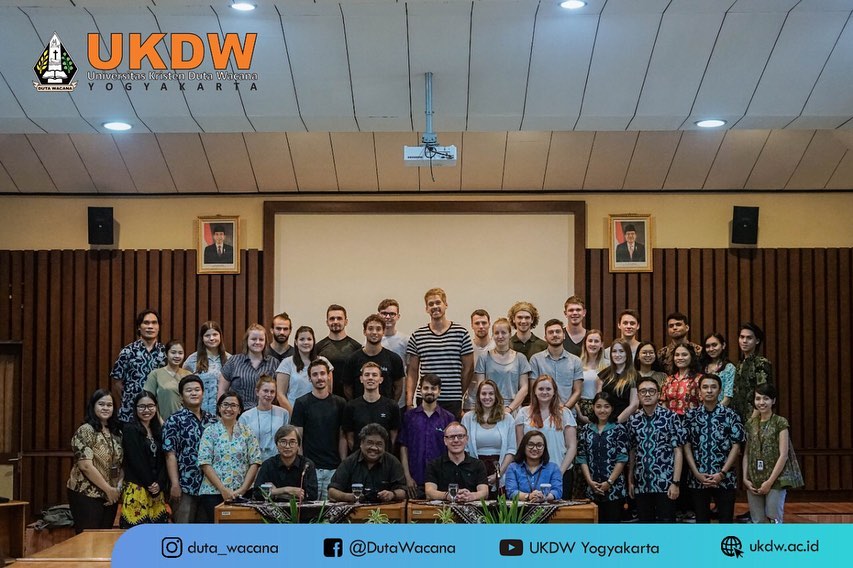 Located in Dr. Harun Hadiwijono Seminar Room, on Monday, 5 August 2019, Universitas Kristen Duta Wacana received a visit from the University of Marburg, Germany. The group that consisted Prof. Dr. Markus Hassler as a Human Geography lecturer and 23 students from Faculty of Geography were accepted by Ir. Henry Feriadi, M.Sc., Ph.D., as the Rector of UKDW, Dr.-Ing., Sita Yuliastuti Amijaya, S.T., M.Eng (Head of the Architecture Study Program), Dr.-Ing. Paulus Bawole, MIP (Head of Urban Laboratory), Arida Susyetina, S.S., M.A., as Head of the Public Relations and Cooperation Office, as well as representatives from Faculty of Architecture and Design lectures and students.

In his remarks, the Rector of UKDW explained that UKDW Yogyakarta is a Christian university that emphasizes the quality of education. “Through this program, we can share insights, increase knowledge, and strengthen relations between countries,” he said.Representing the University of Marburg Germany, Prof. Dr. Markus Hassler said that through the visit to several universities, communities, and institutions in Indonesia, students were expected to learn more from what they saw directly. “I’m interested in Indonesia. I learned a lot by seeing the social life in several cities in Indonesia. At this time I want my students to learn about social life and development in Yogyakarta and surrounding areas,”he said. He revealed that they were also interested in knowing and studying more about the policies made by the Government of Indonesia related to the development and also about issues were developing in Indonesia.

Starting the presentation and discussion session, Dr.-Ing. Sita Yuliastuti Amijaya, S.T., M.Eng as the Head of Architecture Department UKDW gave some information related to the Faculty of Architecture and Design UKDW. She said that Architecture Study Program has advantages in terms of architectural tectonics, understanding of urban village (kampong) life, and environmental-friendly programs. In addition, Faculty of Architecture and Design always include the entrepreneurial element in their project. “We will open an Architect Professional Program that promotes ecodesign and technopreneurship. Thus we hope students can understand other aspects such as socio-cultural aspects, local wisdom values, and technology which also play a role in architects and design so that they can be used creatively in the process of designing an artificial environment that prioritizes the principles of sustainability, “she explained .

In this activity, participants got the opportunity to have more information from  Dr.-Ing. Paulus Bawole, MIP presentation titled “Rural and Urban Development in Yogyakarta”. Through his presentation, Paulus also gave an overview of social life in Urban Kampong. It has come to the attention that Kampong is now synonymous with slum areas or marginalized areas. The stigma that develops in the community is that Kampong is a poor and unhealthy settlement, has a high crime rate, a place for buying and selling illegal drugs, and is inhabited by people with very low economic levels (poor). This has become one of the reasons of several Kampong development projects held by FAD lecturers and students in Yogyakarta area (Bangirejo, Blunyahrejo, Petinggen, Karangwaru Lor, Karangwaru Kidul, and other Kampongs). Service-Learning Program (SLP) is also held in the form of activities for Neighborhood Planning and Design. Through this program, the community, lecturers, and students proceed together to build the Kampong environment into a better settlement. The preparation phase begins with lectures and seminars participated by SLP student participants on Urban Planning and Design and continues with field assessments. Furthermore, the development of plans and designs is carried out with the community after exploring potentials and problems in the community. After discussing, they finalized the neighborhood plan and design and calculated the budget. For project sustainability, monitoring and evaluation is done by the community.Paulus also emphasized the importance of government-community collaboration for the construction of settlements in Yogyakarta. “Synergy between the government and the community is needed to make the environment around the marginalized village settlements better,” he explained.

Through the discussion session, participants were asked to examine what problems were faced in their countries related to development in rural and urban area. The Marburgs’ student said that people in Germany have to think about how to create a sustainable development program. The large number of non-productive age communities who still need land for their house is also a problem in Germany. In addition, Prof. Dr. Markus Hassler added that currently Germany began to think about how to deal with the hot season.Talked about settlement development, UKDW lecturers and students said that currently the Indonesian people are starting to think about sustainable development. Many development methods or concepts use natural materials. One of them is the development of ways to preserve bamboo to be stronger and more beautiful when used as a building material.

This activity ended by inviting participants to Kampong-tour around Klitren Lor, Gondokusuman, Yogyakarta to observe the characteristics of Kampong development and learn about social life in one of the Yogyakarta Kampong by directly interacts with the local community. [ai]