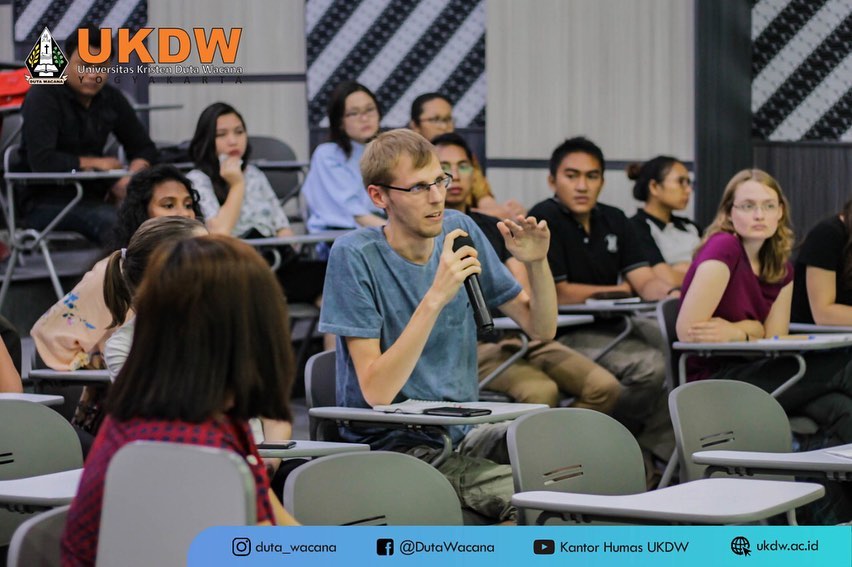 In order to improve the quality of cooperation with overseas universities, on Friday, 9 August 2019, at Didaktos Seminar Room, Universitas Kristen Duta Wacana (UKDW) Yogyakarta held a “Student Visit and Discussion: Health Behavior in Indonesia”. The group consisting of Andreas Kurschat, M.A., lecturer at Leibniz University and project leader at Kirchlicher Entwicklungsdienst (KED), eight students from the Institute of Sociology of Leibniz University in Hanover, Germany and six staff of Stube-HEMAT were received by Dr. Teguh Kristian Perdamaian, MPH (lecturer at the UKDW Faculty of Medicine), Arida Susyetina, S.S., M.A (Head of the Partnershipa and Public Relations Office), and several lecturers from the Faculty of Medicine UKDW, as well as representatives from the Center for Indonesian Medical Students’ Activities (CIMSA ) UKDW.

The session began with remarks and a brief introduction about UKDW and its health projects by Dr. Teguh Kristian Perdamaian, MPH. Furthermore, Ariani Narwasjuti, S.Pd., S.S., M.Pd., as the Executive Director of Stube-HEMAT expressed her gratitude for the welcome and opportunity given by UKDW. Andreas Kurchat M.A., the Project Leader at Kirchlicher Entwicklungsdienst (KED) also expressed his gratitude for the opportunity. Andreas said that the purpose of their visit to UKDW was to discuss about the viewpoints from UKDW and UKDW’s role regarding health issues in Indonesia and to explore the possibility of UKDW becoming a partner for their future projects.

After the remarks, the session continued with presentation and discussion. Starting the presentation session, dr. Teguh Kristian Perdamaian, MPH gave an overview of health behavior in Indonesia through his presentation titled Health-Seeking Behavior in Indonesia. Dr. Teguh asked all participants to see a photo of an old woman. The woman is one of the breast cancer sufferers whom he met in severe condition. The woman also revealed that so far she had not gone to the doctor because she thought that her husband who needed a doctor because of his kidney problem. Through this story, Dr. Teguh emphasized that there is still low awareness of the importance of personal health in marginalized people.”There are still many lower-class people who didn’t have enough health education and information about health promotion. Limited financial capacity prevents people from visiting doctor when they have health problems. Intensive health promotion and community empowerment program is needed to increase the awareness, willingness and the community’s ability to create a healthy live.

The development of community-based health efforts is also needed to create a conducive environment to encourage clean and healthy living behaviors, “he concluded.

Continuing the presentation session, Andreas Kurschat, M.A., provided information on the background of several health projects in Indonesia. KED which is the development service of the Lutheran Regional Churches of Brunswick and Hannover has a close connection with other CSOs, one of them is BUGI. BUGI is CSO founded in 2015 by Indonesian students in Germany. BUGI organized funding to support health and education in Indonesia. Since 2 years ago, KED and BUGI started the health project at Tambak Lorong, Semarang. Field studies showed that residents of Semarang use their toilets without septic tanks and also use the river as a toilet. Therefore, BUGI, KED, and LPUBTN initiated the project to improve sanitary conditions. The two main programs of this project are the improvement of sanitary facilities and the development of the conversion method for feces to fertilizers and biogas.

The session ended with a brief discussion among participants on environmental health conditions in Indonesia related to sanitation and the problem of the diminishing availability of groundwater, especially in densely populated areas such as Yogyakarta. Closing the discussion session, Ariani invited all parties (Leibniz and UKDW) to look more closely at the health problems around, especially in Yogyakarta area so that there will be a collaborative project in the future that can be carried out by Leibniz, KED, and UKDW to improve the quality of health in Yogyakarta. [ai]