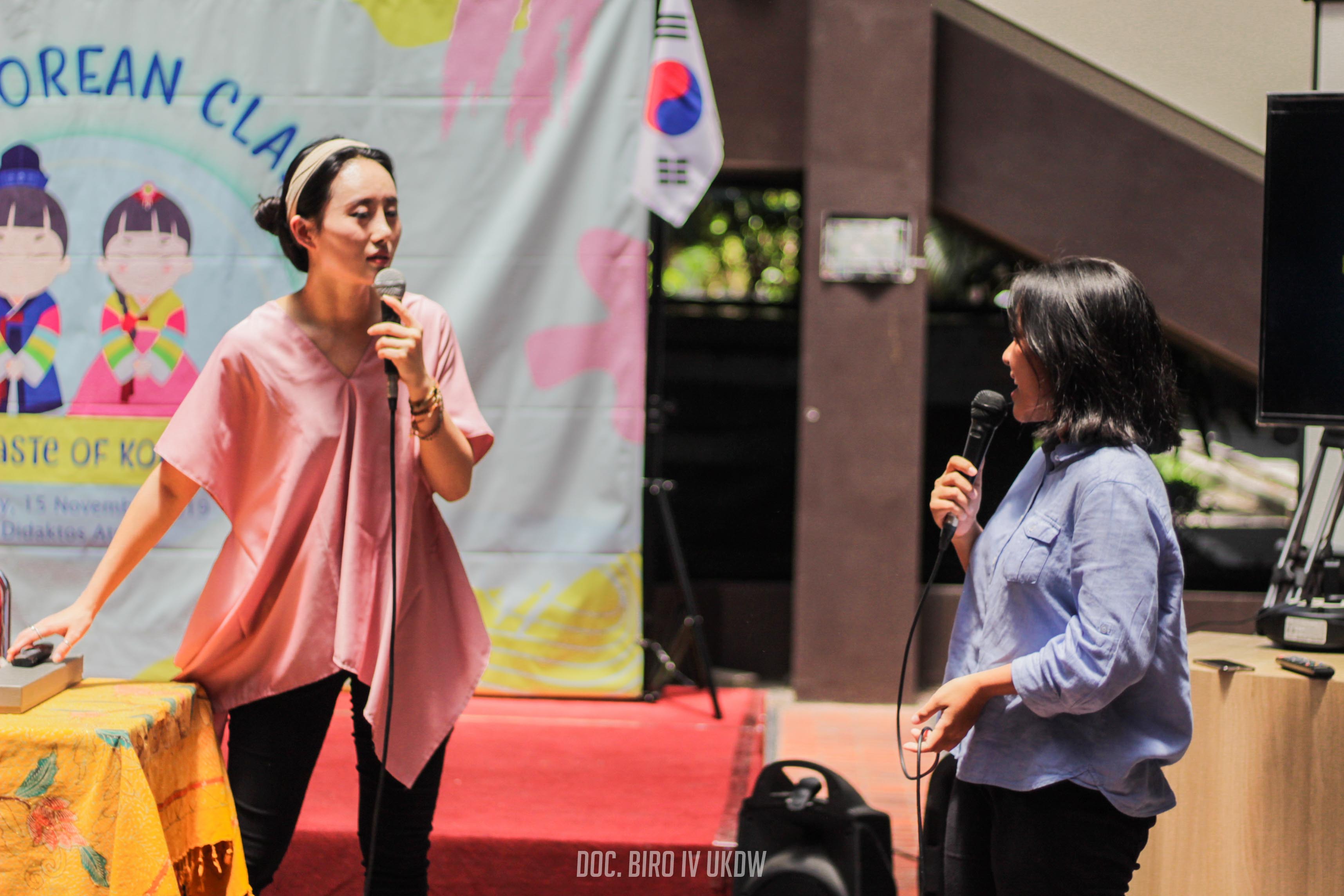 Annyeonghaseyo, gamsahabnida, cheonman-eyo, and mas-issge deuseyo were some words repeated enthusiastically by dozens of Universitas Kristen Duta Wacana (UKDW) students as they joined Fun Korean Class “A Taste of Korea” that was held at Didaktos Atrium on Friday, 15 November 2019.

This event was conducted to promote Korean Language Class as a cross-major subject that will be offered at UKDW in the upcoming semester, as well as to introduce Ms. Kwon Seonhwa – a volunteer under the World Friend KOICA (WFK) Program who will teach in that class.

“The Korean Language Class will be opened next semester. Desi (Ms. Kwon’s Indonesian name which she got from her teacher) has been preparing the syllabus and teaching materials,” Rev. Handi Hadiwitanto, Ph.D. - the Vice Rector for Human Resource Capacity Building and Partnerships said in his opening remarks. More detailed information about the Korean Language Class was explained by the Head of English Language Education Department, Lemmuela Alvita Kurniawati, M.Hum.

Besides Korean Language Class, UKDW students can expect other interesting Korean-related activities by joining the Korean Club which will kick off next semester, the Director of the Office of Partnerships and Public Relations, Arida Susyetina, S.S., M.A. said.

Ms. Kwon shared about her home country - South Korea in her presentation. Corresponding with the theme “A Taste of Korea”, students were invited to take a look at Korean culture, culinary, lifestyle, and current issues in Korean society.

“Korean people have a ppalli- ppalli culture which means “hurry, hurry”. We like to get things done as quickly as possible,” Ms. Kwon explained. She also claimed that South Korea has the fastest internet connection speed in the world.

Sadly, the home of Samsung, LG, and Hyundai is placed among the countries with the highest suicide rate. “South Korea's suicide rate remains the highest among Organization for Economic Cooperation and Development (OECD) members,” Ms. Kwon pointed out.

Now, talking about Korea is almost impossible to rule out the “Korean Wave” – a term refers to the rise of global popularity of South Koreas’ pop culture, entertainment, music, TV dramas, and movies. The Korean Waves undoubtedly has increased the number of people who want to learn Korean Language.

“I’d like to be able to watch Korean dramas without subtitles,” said one student responding to the question about the reason of wanting to learn Korean Language.

“I want to join an exchange program in South Korea. I think, learning the language will be useful,” said another student.

The fun was heightened as the cooking class began. Participants were divided into groups of three to four students to make gimbap – a famous Korean dish. Gimbap is made from cooked rice and other ingredients that are rolled in dried sheets of nori seaweed and served in bite-sized slices. By the end of the cooking class, one group with the best plating was chosen as the winner.

The Fun Korean Class “A Taste of Korea” was organized by the Office of Partnerships and Public Relations joining hands with Language Training Center and English Language Education Department.

Be ready for Korean Language Class and Korean Club! [drr]